Wounded Warriors Have a Few Words for Players

Former Army Sgt. Rick Yarosh of Binghamton had a similar message: "Play hard, play as a team, and make sure you become a family. It's more than just baseball. Working as a team and becoming family...That's how we survived in Iraq."

Roberts, who served three tours in Iraq before heading to Afghanistan where a roadside bomb caused his vehicle to flip and crush his spine, noted that after a number of back surgeries and now rehab at Sitrin, "I'm just glad I can walk again," albeit with a cane.

A roadside bomb burned 60 percent of Yarosh's body, scarred his face and torso, maimed his hands, and amputated his right leg. He came to Sitrin to undergo therapy that would help him play golf again, and then Sitrin hired him to work with other wounded warriors.

The players handed baseballs to both men, asking for their autographs.

"It was amazing," Roberts said. "I was never asked for my autograph before. I'm an infantry officer. I'm used to being on the other side, asking for autographs."

Andrean Post Commander and Tournament Director Michael Macchione noted that with the best teams in the state playing for the championship, The American Legion "wanted to make a different connection" for the players. Some were visiting World War II, Korean War and Vietnam veterans at St. Luke's Home across town, while other players were spending a little time with wounded warriors and other Persian Gulf veterans at Sitrin, where they could get "autographs to take home and put on the mantle" as true momentoes.

Commander Governor added that the day illustrated what The American Legion is really about -- "service first to our veterans, to families and youth, to our communities." 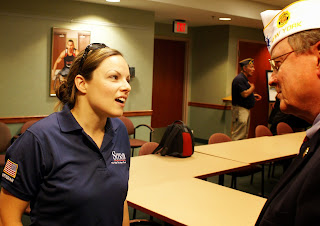 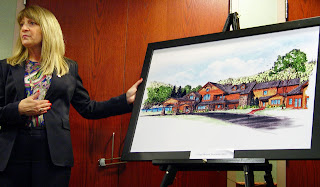 Rosemary Benzo Bonacci, Sitrin's vice president of Development and Communications, shows an illustration of a lakeside lodge that Sitrin plans to build at its nearby Camp Sitrin -- to provide a therapeutic environment for various traumas that military personnel have suffered. 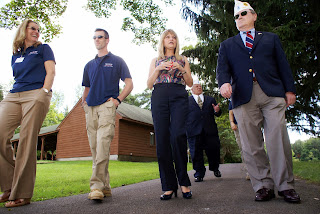 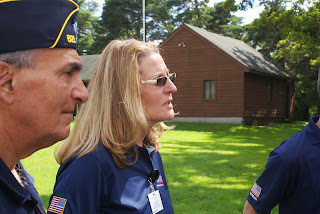