New York Department leaders are making visitations around the state, sharing their vision and passion with local Legion Family members. Here's an example of such a visit -- to the 5th District's Oneida County.

"Every once in a while someone will say, 'Do you guys do anything but sit around the bar telling war stories?'"

During a visit to Oneida County Sept. 29, Van Patten told a packed banquet hall at New Hartford Post 1376 what he says to such a question.

The Legion is not about bars -- even though it's a place to get together "after we visit one of our members in the hospital or nursing home, or after we've finished interviewing our candidates for Boys' State, or after we finish judging an essay or oratorical contest after the parents and candidates have left."

It's a place to gather "usually after a membership meeting where we discuss how we can go about recruiting new members, where in the community we can donate money, who we should donate food baskets to, or after cleaning up from the Community Christmas Party or Easter Egg Hunt that our post has sponsored."

It's a place to share stories "after everyone has left our memorial service or come back to our post after a parade for hot dogs and refreshments, or usually after we come back from watching the baseball team we sponsor or watching our junior shooters."

"And finally, yes, we sit around the bar and tell war stories after we come back from a pass-in-review for one of our members who died, someone who dodged bullets through the forests of Vietnam or spent months on a ship in the middle of the ocean, someone who served years in the desert taking hits from IEDs and watching fellow soldiers fall -- a fellow veteran who put his or her life on the line to give you the freedom to stand there and ask, 'do you guys do anything else besides sit around the bar and tell war stores?' "

To avoid that kind of perception, "we need good public relations," Van Patten said, encouraging every post to have a PR person reporting to the news media "what we are doing and why we are here."

Van Patten was joined by:

-- Department Auxiliary President Sally Johnsten, who encouraged dinner guests to "remember why you joined," "renew you commitment," and "reach out" to others.

-- Sons of the American Legion (SAL) Detachment Commander John Knapp, who said he had a three-fold focus to recruitt members, encourage donations to the National Emergency Fund that helps disaster-struck Legion familes, and raise money for the Child Welfare Foundation, which provides grants to organizations that help children.

Knapp hopes to raise $7,000 for those projects. His spouse, he said, is offering an incentive to reach that goal. "My wife will dye her hair blue and gold, and shave it into a Mohawk."

All three Legion Family leaders put an emphasis on membership. Imagine the impact on the Legion and its programs, Johnsten said, "if each of us would go and recruit just one new member." Always carry a membership application with you, they urged -- especially the simple three-way form developed by New York Department to sign up members for the Legion, Auxiliary and Sons.

Added Johnsten: "The best way to get members is to just ask." 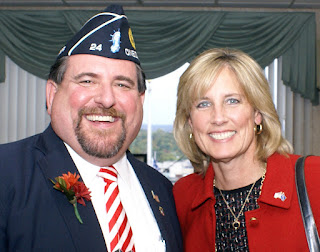 Oneida County Commander Dave Riley and Assemblywoman Claudia Tenney welcomed the New York Legion Family leaders to the county. Riley served as master of ceremonies at the dinner, and Tenney, an Auxiliary member and mother of a Naval Academy cadet, praised the Legion for being "a great extended family for our veterans and families."
Posted by NY Legion PR at 11:01 PM