MINEOLA -- Word got around that Yuri Karasz was a veteran, so when Carl Marchese met her, he made a deal: If he became commander of Mineola American Legion Post 349, she would become the first female member in the post's 90-year history, reports MineolaPatch.com.

He did, and she did, being formally inducted in an August ceremony at the village hall. State Sen. Jack M. Martins and local VFW Commander Manny Grilo were there to congratulate Karaz, a former army captain and West Point graduate.

Noted Senator Martins: “Yuri Karasz is an outstanding member of the community who accomplished so much. She served our country and now is helping others pursue their dreams of becoming medical professionals. The Mineola American Legion is an outstanding veterans organization and has only been further enriched by having her as a member.”

She served in the Army Transportation Corps in Germany and at Fort Eustis, VA. She was an assistant professor of chemistry at West Point and taught military science to ROTC cadets at RPI, Siena College and SUNY Albany. She also found time at West Point to be the team’s fencing captain.

As a strong proponent of education, Karasz worked as the continuing medical education coordinator for New York College of Osteopathic Medicine at New York Institute of Technology, where she founded the Careers in Medicine Resource Center. Currently manager of trainee services for NYCOMEC, Karasz recruits residents to nearly 30 hospitals in New York and New Jersey.

Post Commander Marchese hopes the induction of the first woman member will attract other female veterans as well as an infusion of younger members.
*** 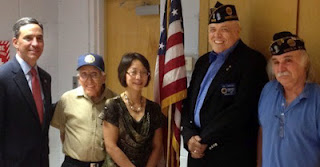