INDIANAPOLIS -- Richard M. Pedro, adjutant of the Department of New York, has become only the 11th person in the history of the 93-year-old American Legion to be named “Past National Commander of The American Legion,” without actually serving a term as national commander.

“I am absolutely floored,” Pedro said after being sworn in as a past national commander by the current Legion National Commander Fang A. Wong, also of New York. “The American Legion is a great organization; I am honored and proud to be a part of it.”

While presenting Pedro a plaque commemorating the honor, North Carolina Nationl Executive Committee member Jerry Hedrick said, “These plaques are usually given to men who are about to do great things, but you have already done great things, a lifetime full of great things for your fellow veterans, your country and The American Legion. We know that you will continue to serve The American Legion and all of us will continue to be far better because of it.” 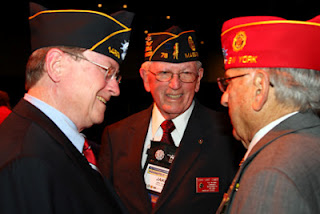