News media report expressions of community support for Dobbs Ferry American Legion Post 1048 after its building collapsed under the weight of heavy snow on Valentine's Day.


After a series of snowfalls, Legion members noticed a separation between the ceiling and wall and asked the village to inspect the building. Building inspector Ed Manley visited the site and ordered the building closed two days before the collapse. 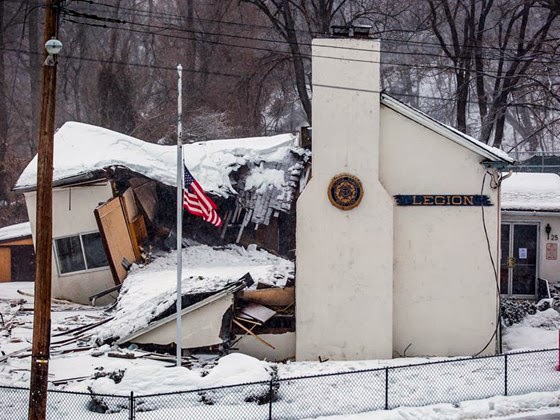 Post 1048 posted an announcement on its Facebook page: "The building collapsed, but the fellowship and friendships of the American Legion veterans remain strong."

The Terrytown Daily Voice reported: "Response from the community was immediate as residents began supporting a rebuilding project" with an online fundraising page.

The paper quoted Dobbs Ferry Pizza owner John Tacij: "My heart goes out to my fellow residents in Dobbs Ferry. Tonight we lost the American Legion 1048 to a collapse. The building is lost but not what it stood for. We will rebuild."

The Post's Facebook page says the building was originally a one-room schoolhouse, built around 1899. "It was disassembled and rebuilt on its current site for use by WWI vets."
Posted by NY Legion PR at 2:48 PM