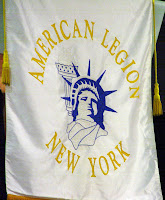 NIAGARA FALLS, July 19 -- The issue of membership dues resurfaced during the second day of the New York Department Convention, with the delegate body overwhelmingly supporting a smaller, $5 increase, effective Jan. 1, 2014.

Citing dwindling revenue due to a lower membership roll and rising operating costs due to inflation, the resolutions committee proposed raising Department dues from $11 to $16, in the wake of yesterday's defeated motion for an $8 increase. The assembly recessed for a 15-minute caucus, allowing county delegations to discuss the proposal. That was followed by a roll call vote, with 375 voting in favor and 107 voting against, with seven abstentions. Members who pay their 2014 dues before January would not be immediately affected by the increase.

Chris Huntzinger, national commander of the Sons of the American Legion (SAL), kicked off Friday's session with a brief appearance to thank Legionnaires for their service -- and especially those who are dual Legion/SAL members. He mentioned how he became interested in joining SAL, only to have to ask his veteran father to join the Legion first. Asked why he never joined, his father replied: "I was never asked."

He encouraged Legion members to recruit other veterans. "Just ask!"

Department President Sally Johnston also made a brief appearance, receiving a standing ovation. She expressed her gratitude for what veterans have done for the country, and offered a special thankyou to women veterans.Thanks to Department Commander Tim Van Patten's camaraderie, she felt there was one "true American Legion Family."

Noting that 1,020 boys completed this year's American Legion Boys State, Executive Director John Murphy said many people believe that "Boys State is vital to the future of our nation." All 62 counties sent delegates to this year's session at Morrisville State College, where they were immersed in leadership, citizenship, civics and the American political system. Murphy introduced this year's Boys State governor, 17-year-old Devin Kenny of Staten Island, who immediately pointed to leadership, teamwork and problem-solving skills he took away from the program. The youth plays three varsity sports in school and participates in such extra-curricular activities as bringing gifts and holding cookouts for  veterans at the VA Hospital. His aspiration is to attend the U.S. Naval Academy or get a full ROTC scholarship.

The New York oratorical champion, Jacob Caldwell, said he was grateful to the Legion for organizing the competition, and not just because he won a $6,000 prize. To compete, he said, he had to delve deeply into the U.S. Constitution, forcing him to come to appreciate constitutional rights. It's an exercise he believes every high school student should undertake. Another unexpected benefit for the Frewsburg Central School student: "My parents have come to ignore me speaking to myself in the basement."

Retired Army Col. Eric Hesse, director of the New York State Division of Veterans Affairs, brought greetings and gratitude from Gov. Andrew Cuomo, and promised strategic initiatives that would improve services to veterans. There have been changes in the members of the Veterans Affairs team, he said, but "what has not changed is the commitment to serve veterans."

Assemblyman Michael Benedetto, chairman of the Assembly Veterans Affairs Committee, said the legislature has been pursuing legislation in response to veterans concerns, and he appreciated the American Legion's role in "educating" him. For example, legislation is awaiting the governor's signature that would give priority to veterans in temp jobs that the state annually hires out to fill in gaps in the state workforce. Another bill, also awaiting the governor's signature, establishes a speaker's bureau of volunteer veterans interested in going out to schools.

Thanking the Legion for all it does, he noted: "You have service in your souls...We are all better people because of your efforts."

Some of the award highlights: