Quilts for Soldiers in Afghanistan 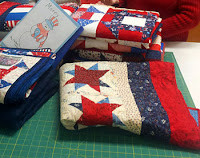 By Bradd Vickers
NORWICH -- It was sad when Karen Kamsoke’s nephew Kurt Buchta, deployed to Afghanistan as a company commander of 71 soldiers, was told about 13 of his soldiers that don’t get anything from home. Kurt asked Karen if she would consider adopting the 13 soldiers by sending packages and letters, etc., and could she possibly make quilts for them. Karen, not thinking of the time frame and work, said “of course.”


When Karen realized what she had committed to and not wanting to let her nephew down, she contacted her quilting friends for help. They often work on quilts at Sew Nice in Norwich, NY, owned by Diane Marvin. When Diane and the staff heard about the project they were more than eager to assist. Diane put the word out about the project to quilters who might be attending a quilt retreat she was planning the following Veterans Day weekend and 75 women showed up. Hard to believe they now had 13 handmade quilts for the soldiers.

Nancy Cody, one of the quilters working on the project, told her friend Rainy Collins-Vickers, vice president of the McDonough Post 1478 Auxiliary, about the needs to deal with the cost of handling and shipping to complete the project. Rainy immediately responded with,“That’s what the American Legion does; help the men and women of the military.”

Rainy took the request for funding of the project to the next meeting. Judy Baker, the unit president, was able to come up with the full funding between American Legion, the Auxiliary and the Sons of the American Legion (SAL). The packages were scheduled to arrive before the holidays. 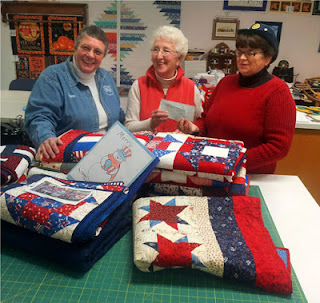 Karen and Diane are now thinking how this could be an ongoing project. For more information call Sew Nice 607-334-2477.