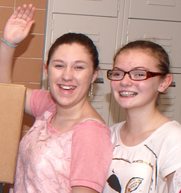 UTICA -- Thanks to a food drive by the National Honor Society at John F. Kennedy Middle School, the American Legion's Utica Post 229 donated 14 boxes of non-perishable food to the Central New York Veterans Outreach Center in Utica on Nov. 16.


The 8th Grade honor students presented the food to the American Legion Nov. 13 after two Legionnaires spoke to them about their combat experiences in World War II.

"Food donations to our pantry are always appreciated," noted Center Project Director Teresa Favo-Schram, "but to have such a large donation from a local school in honor of the veterans in this community one week before Thanksgiving will really give us the boost we need right now."

DURING THE veterans' talk at the school, one student asked them: "Were you scared?"

"Oh, God, yes," Phil Capraro replied. "I was scared all the way" -- from Omaha Beach on D-Day, where he was shot in the leg, to the Siegfried Line, where he was bayoneted in the shoulder in hand-to-hand combat with German soldiers, to the Battle of the Bulge, where he was literally blown out of his machine gun placement.

"If any soldier tells you he wasn't scared, something's wrong with him." He showed the Honor Society students the three Purple Hearts he received, along with various other decorations, including two Bronze Stars for heroic action.

"We got those for capturing Germans."

Capraro, who fought with the 42nd Infantry Rainbow Division, was invited to speak to the Honor Society, along with Navy Veteran Frank Zammiello, who described the nightmare of trying to shoot down a seemingly unending stream of kamikaze aircraft bent on destroying the light cruiser he was serving on.

Even though he joined the army at the age of 18 and didn't finish high school, Capraro told the students: "Your education is one of the most important things you can do in the world. It's up to you to be your own person… to make your own way in the world… As a favor to yourselves, learn as much as you can."

Capraro, who said he is "pushing 88," also showed a picture of himself in his army uniform. "This is me at 18 years old. Do I look the same?" 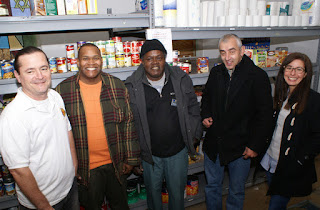