“When they left, they had jobs,” he said. “When they come home, there are no jobs for them. We have got to make sure they’re taken care of.”

The American Legion assists veterans in finding jobs through job fairs, with over 200 held last year.


The national commander was making a swing through western New York Oct. 26-28, visiting the 6th, 7th and 8th Districts. He was accompanied by NY Department Commander Tim Van Patten and other state and district leaders.

The Messenger Post reported that Koutz also spoke on another issue facing veterans: the backlog of VA claims, which he said was nearing a million. Some claims, he said, have been around as long as five years. He said he believes reason for the backlog is a need for more employees in VA offices, and he would like to see more people hired.

“What that means to the community is money,” he said. “...It helps the economy, and it helps families.” 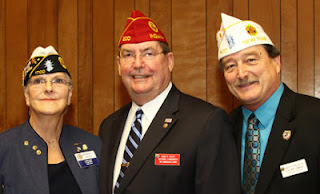