ROCHESTER -- Timothy Van Patten is the new commander of the Department of New York. His election on July 21 for the 2012-13 term followed a rousing parade of supporters carrying campaign signs, and a colorful pinstripe-suited brass band blaring marching and patriotic tunes.

"With your help, we will have a very productive year, refueling our future," declared Van Patten, a Navy vet who served on an Oiler that refueled ships during the Vietnam War.

The installation of Van Patten and his key department officers concluded the final day of the convention, which kicked off with presentations by the Sons of the Amerian Legion.

Outgoing Detachment Commander Greg "Doc" Gibbs spoke of sharing a wonderful year with Outgoing Department Commander W. Michael Bowen, and how at first he didn't quite understand Bowen's reference to "there's no rank among us." Then he realized that "we all share the same mission and have the same pay."

The NY Detachment raised $31,000 in the past year for veterans and youth programs, he noted. New York SAL membership is at 98.2 percent of goal, and should be at 100 percent by the time of the national convention in August, he said. Then he presented three checks to Bowen:$13,750 for the national emergency fund, $1,500 for the commander's project, and $200 for the Legacy Scholarship Fund.

Gibbs introduced his successor, 2012-13 Detachment Commander John Knapp Sr.  from Broome County, who stated that his project would be to support the department commander's project and the national emergency fund. Then World War II vet Al Paviglianti made a special presentation to Knapp. "This is to conduct your meeting. This gavel belonged to your dad."

Next up was the leading candidate for the SAL national commander, Chris Huntzinger from Pennsylvania. Huntzinger recounted how he was invited to join the Sons as a way to get his dad to join the Legion. He asked his father why he hadn't been a member, and he replied that he didn't know much about the Legion and "I was never asked."

Echoing Commander Bowen's membership theme, he said, "Just ask, and give them a little education (about the legion)." To that end, he will urge all SAL members to take the American Legion Extension Institute online class about the Legion so they can be prepared to educate prospects when asking them to join.

"Our continued success depends on us working together as the American Legion Family," he said, adding: "We are the greatest organization on the face of the earth."

Then National SAL Commander James Roberts stepped up to the podium and said: "Good morning, fellow members of the American Legion Family."

He asked the dual members of the Legion and SAL to stand. Quoting a past national SAL commander, Roberts said: "If you're not dual, you're not cool; so thanks for being cool!"

He recounted how he joined the Sons when his dad got him a membership as a birthday present, and then invited him to march in a parade and carry a rifle. "I was 8 years old, got to march in a parade, and got to carry a gun (even if it was a heavy M1)." And it was the first time the post assembled a Legion Family color guard.

His message to SAL members has been three-pronged. "We need to communicate, we need to be committed, we need to show recognition for folks doing good things." As a result, "we've accomplished a lot, and folks are coming back to renew their memberships."

He referred to the "Drive for 5" campaign, with the Sons committing to raise $5 million for child welfare. "I'm proud to say that on Nov. 17 we surpassed our $5 million goal," with the Sons raising over a half million dollars this year alone.

Once the SAL delegation departed, the Educator of the Year was honored. He is Richard Forsey of Spencerport. He said the award was a tribute to his parents, who got him to join the Legion when he returned from Vietnam, and that "all of you are educators by supporting" the many Legion and SAL programs.

Mike Hannan, dean of New York's Legion College, reminded the convention that the purpose of the college is to build Legion leaders. The class of 2012 included 81 men and 13 women, ranging in age from 25 to 84. Two of the students were SAL members. "We now have close to 750 graduates," he said.

One other award highlighted the convention. Kerri Hands of Orient, NY was named the Junior ROTC Cadet of the Year. She was cadet commander in the Navy JROTC program at Southold High School. Mother Janet and sister Shannon accepted the award and scholarship on Kerri's behalf -- because she was participating in Plebe Summer at the U.S. Naval Academy at Annapolis. Her mother said Kerri "would like to fly Cobras for the Marines," and that her advice to other youth would be: "Keep trying. If something gets in your way, stand tall, and keep trying."

As Janet and Shannon Hands were leaving the stage, Department Adjutant Richard Pedro shouted: "Bill Hands was a pitcher for the Chicago Cubs…He's the girl's grandfather." 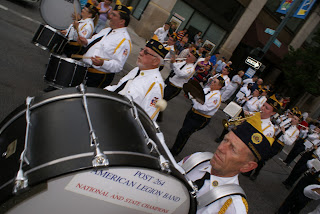 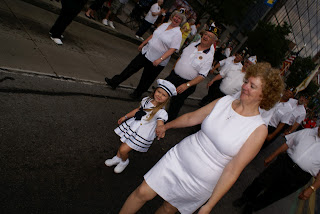 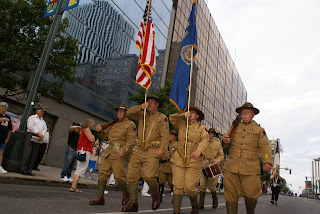 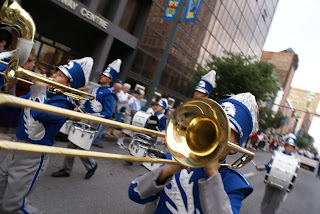